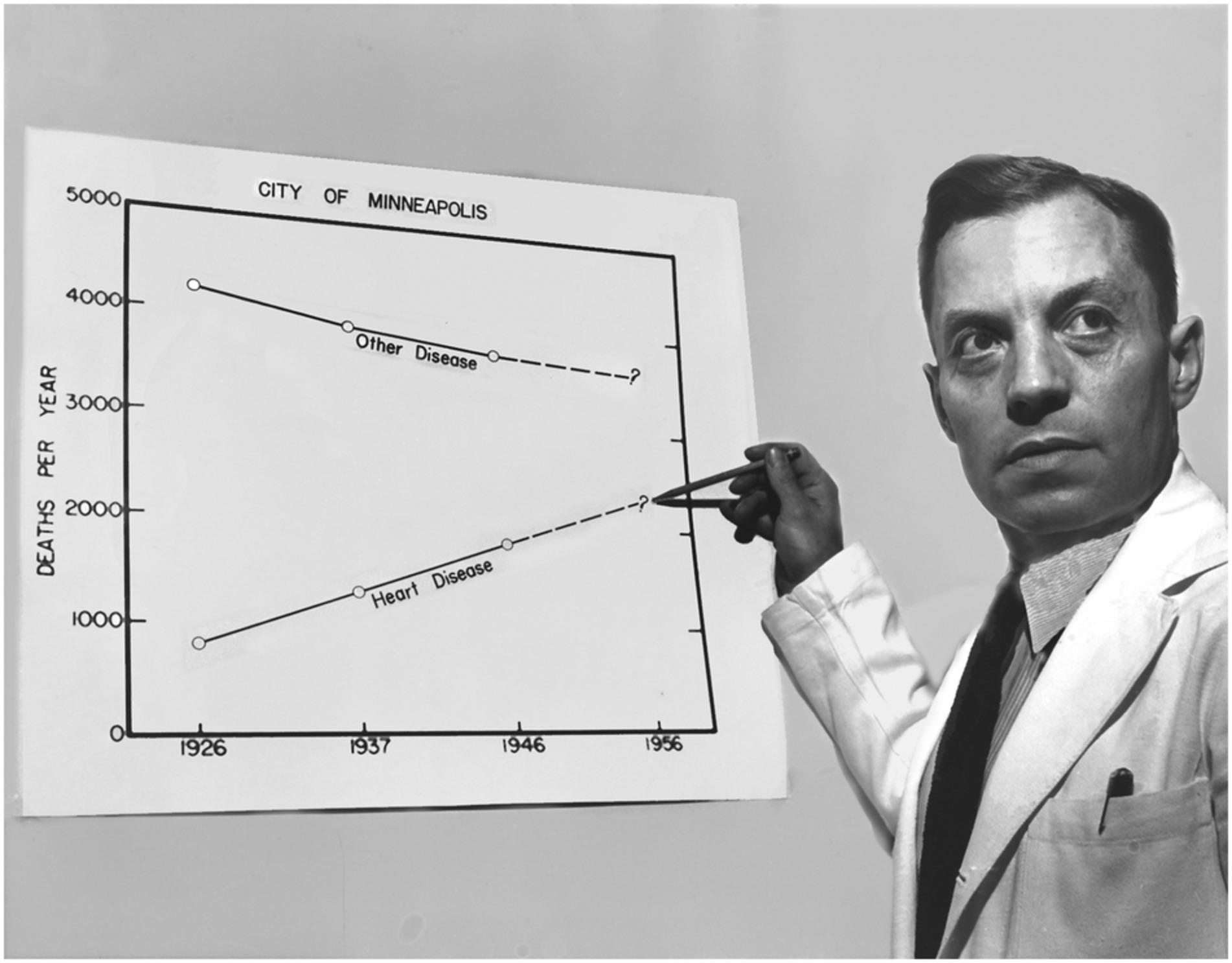 The Scientist Who Linked Cholesterol and Diet With Heart Attacks

Have you heard that having high cholesterol, and eating foods with saturated fat are bad for your body and heart?!? Of course you've heard, because since 1958 scientist Ancel Keys has been telling us!
Ancel Keys was born on January 26, 1904 in Colorado Springs, but his family moved to San Francisco just in time for the 1906 earthquake. Growing up across the bay in Berkeley. He had many jobs before getting several doctorates and becoming a renowned physiologist. As a teen he worked in a lumber camp for a while, and then shovelled bat guano in an Arizona cave. He served as a powder monkey in a Colorado gold mine and later as a clerk in a Woolworth store. In 1939 he married Margaret, a biochemist and they would go on to work together studying physiology (functions of living organisms) and nutrition.

In 1937 he founded the Laboratory of Physiological Hygiene at the University of Minnesota and began a relationship with the Army Quartermaster Corps. His colleague, Dr. Elsworth Buskirk, tells the story of how Keys developed K-rations: "When it appeared that the U.S. would be in World War II, Keys went to the Quartermaster Food and Container Institute in Chicago to inquire about emergency rations. The story goes that he was told to go home and leave such things to the professionals. Undissuaded, he went to William Wrigley's office and secured $10,000 for the development of an emergency ration. Then, he went to the Cracker Jack Company. They couldn't supply money, but did provide the water-tight small box concept. The result was the K-ration in sealed Cracker Jack boxes."  There were many complaints from the soldiers about the meals being small and tasteless, but they were purposefully small for transport, and were created to be nutritious more than tasty. So, there was also gratitude, like the 25 soldiers who survived for 10 days in a half-submerged transport plane with nothing but 25 K-rations and a gallon of water.

After the War, Ancel Keys' made two divergent sociological observations.  Businessmen, theoretically the best fed people on earth, had a lot of heart attacks.  In contrast, Europeans after World War II, who for several years lived on near starvation diets due to the disruption the war caused, had an unusually low rate of heart disease. Keys' postulated that the businessmen's diet was high in fat, leading to increased cholesterol, and the European diet was low in fat, leading to low cholesterol. His hypothesis was that cholesterol affected cardiovascular disease (CVD). Then he set about the first cholesterol study. At a 1955 World Health Organization of experts he confidently presented his diet-lipid-heart disease hypothesis. It was not well received.

So, in 1956 Keys began his landmark research study, the Seven Countries study. This work followed 12,000 healthy middle-aged men living in Italy, the Greek Islands, Yugoslavia, the Netherlands, Finland, Japan and the United States for decades, and led Keys to discover that saturated fats were a major cause of heart attacks. He determined that a Mediterranean diet, rich in fruits and vegetables, pasta, bread and olive oil was highly protective against heart disease. In Finland and the United States, which eat a lot of animal fats (in Finland it is common to spread butter on cheese!), the rate of heart attack was about 10 times higher. Following this discovery, Keys made it his mission to encourage people to eat less saturated fat, lower their cholesterol and prevent heart attacks. He became so well known that he once said, "There's a little hotel in Brussels that my wife and I stop at now and then, and every time I go in there the maitre d', a lady in her sixties, says, 'Ah, Monsieur Cholesterol!'"

Keys' ideas are largely accepted now, but were very controversial for decades. Not only experts argued over high fat diets, but so did food companies that produced those foods. Ancel Keys must have followed his own dietary ideas, because he lived to 100, dying on November 20, 2004. He remained intellectually active through his 97th year.

Ancel Keys was one of the gifted children Lewis Terman followed in his famous Longitudinal High IQ Genuis Study.